At 6.30pm St John’s Church was comfortably full. By 6.45pm it was packed with every seat taken. When the choir arrived, it was interesting to see the numbers of young singers had grown considerably as had the men’s section of the senior choir. This was to prove quite significant in the following two hours.
The concert opened with an excellent performance of Vivaldi’s ‘Gloria’ when it became obvious that the choir continues to improve. The concert was not to be just the normal favourites. This time, two wonderful pieces by John Rutter were included and really gave the choir a chance to demonstrate how far they have travelled in their search for excellence. 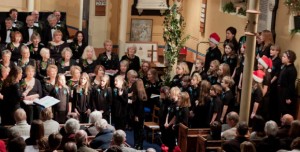 At this concert there were performances by individual voices, groups and sections creating a refreshing, balanced programme.

Indeed when YAS performed ‘Once In Royal David’s City’ it was accompanied beautifully by a trumpet played by young Josh Short. The whole choir joined and the blend of young and mature voices was delicious and very effective.
A section of the choir, fifteen voices in all, came forward and the assistant musical director, Steve Duckworth conducted two pieces from Bob Chilcott’s Jazz Mass and ‘O Come, O Come Emmanuel’. These were very accomplished performances with a pleasing variety of volume and harmony.

Just before the interval, the audience had their first chance to perform, singing with great enthusiasm ‘Hark! The Herald-Angels Sing’. During the interval it transpired that one of the YAS parents had baked three hundred and fifty mince pies. They were very special and did not last long. They were mostly accompanied by a very mulled wine. This, it is now clear, was a cunning plan by the musical director.

On returning to their seats the audience was informed that it was time to sing the now traditional ‘Twelve Days of Christmas’ but they were instructed that on this occasion animation was required! Laced with mulled wine, the results were hilarious. Ladies-dancing, Lords-a-leaping and six Geese-a-laying can only be left to the imagination. The only group to be left with any dignity was the Young Singers who had cheated by practising their ‘Partridge in a Pear Tree’.

We know that the choirs have changed and improved over the years, but so have the audiences. On this occasion not only was there warm and generous applause, but on several occasions there was an outbreak of spontaneous cheering and sustained clapping. 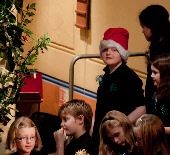 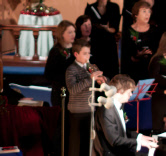 The first of the outbreaks came after a fabulous performance by the Young Ashbourne Singers of ‘A Seasonal Medley’ . It was like watching ‘The Young Choir of the Year’ in the way they had been coached in their singing and physical movements. What a joy. Everyone was breathless.

The second ‘roar’ followed a really polished performance by Linda Perry Smith, Liz Grime and Catherine Lawson of ‘Santa Baby’. The audience were won over after it took the three ladies several minutes to adjust their pink Santa hats to the required angles. But what a joyful performance.

The sale of refreshments during the interval amounted to over £150 and with an additional donation from the Ashbourne Singers, the Ashbourne branch of the First Responders were given £250.