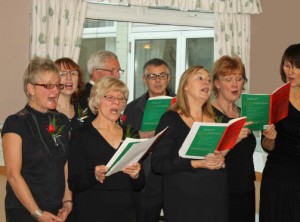 The ladies and gentlemen of the Leys Residential Home enjoyed an afternoon’s entertainment when a small group of Ashbourne Singers joined them.  Linda Perry Smith led the singers with traditional carols and Mel Gill accompanied them on the keyboard.

Assembled by the town hall, a small group of Ashbourne Singers had an excellent view of the lantern parade and nativity scene, as they sang traditional carols for the crowds.  Their carolling encouraged donations to the charity selected for that evening – the Ashbourne First Responders.

Once more, a small group of Ashbourne Singers assembled at St. Oswald’s Hospital, to sing traditional carols for the Careline Christmas coffee morning, when £450 was raised by the sales of tea and coffee, cakes, tombola and guess the weight of the cake.  They were led by Linda Perry Smith and accompanied on the keyboard by Steve Duckworth, to the delight of the folks attending.