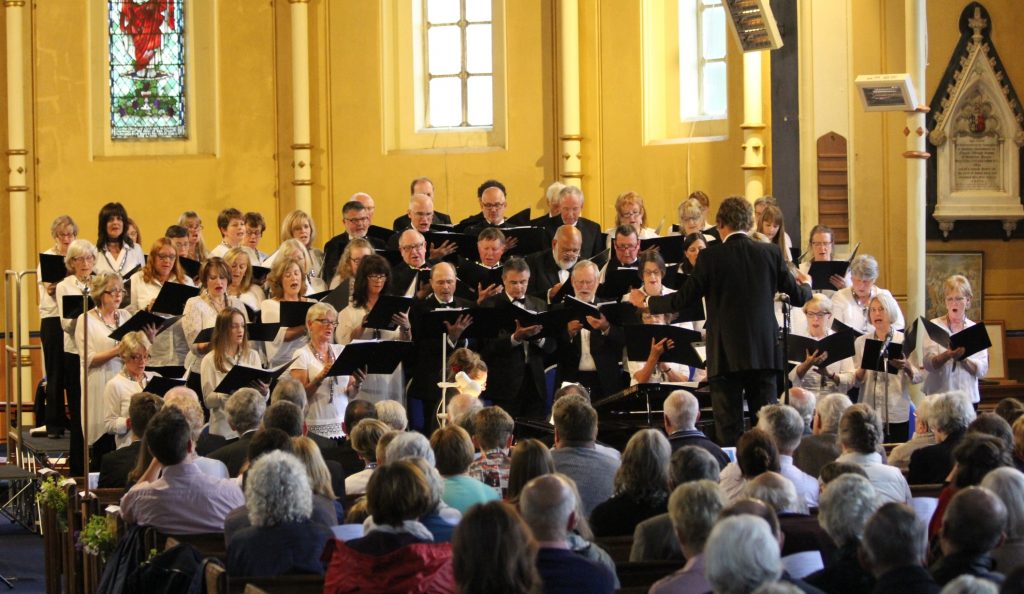 It was a special night in St John’s Church celebrating ten years of the Ashbourne Singers.   There was a lovely warm atmosphere, the Church was packed and the Singers were in good voice.

Steve Duckworth, yet again, put together a wonderful programme with a good mix of classical and contemporary music to suit all tastes.  Sixteen former choir members joined up for the day, which comprised of an afternoon rehearsal to bring everyone up to speed with the programme.  The concert opened with three operatic choruses; Brindisi from La Traviata, Prayer from Moses in Egypt and the Chorus of the Hebrew Slaves from Nabucco.   All real crowd pleasers that audiences love to hear at Choral Concerts.  Prayer featured a quartet of soloists from the choir (Sally Hamer, Midge Dobbs, Ray Taylor and Paul Flint).

The young singers reprised their lovely rendition of Bob Chilcott’s Can You Hear Me?, complete with sign language to illustrate the wonder of a world seen through the eyes of a deaf child, followed by I have a dream by Mary Donnelly.  Both pieces are challenging works in two part harmony.  The Young Ashbourne Singers are, well . . . Fabulous!

Will Todd’s Call of Wisdom, John Rutter’s Look to the Day and Leonard Cohen’s Hallelujah (which included solos from Krista Pearson and Beth Schratz) were ably performed by the Singers, who then welcomed back Linda Perry Smith, the founder of Ashbourne Singers, to sing a moving solo in Steve’s own arrangement of Amazing Grace.

Total Praise, a slow paced gospel song with a strong melodic hook by Richard Smallwood, closed the second half and the audience retired to enjoy their summer punch.  The start of the second half did not allow for any dozing off after the punch!  Say the Word, an upbeat multi-part gospel song, rocked the building and was then followed by the moving Zulu chant, Senzeni Na, led confidently by our caller Tom Palmer.

A few years ago the Singers gave a concert with their interpretations of popular songs, including the Marvin Gaye and Tammi Tyrell classic Ain’t No Mountain High Enough.  It is always great fun to sing and this time was led with solo’s from Dorsan Baker and Liz Grimes.

Back came the Young Singers with the fun but reflective song When I Grow Up from the musical Matilda with poignant solos from sisters Emmy and Annie Woods.  YAS then sang one of their all-time favourites, Sing, by Andrew Lloyd Webber and Gary Barlow with soloist Esme Clowes ending the piece.  It’s nice to know that the next song from YAS, The Hippopotamus Song is still being sung and enjoyed today. The audience had no trouble joining in the chorus.

Les Miserables is universally popular and the medley of songs from the show held the audience with their rousing and emotionally charged melodies. Steve stepped down from his usual role as conductor and took to the piano to make way for our young up and coming musician Josh Short. Josh took the reins of the choir and enthusiastically conducted the challenging work which included several solos from:  Emma Palmer, Jessica Duckworth, Alan Kingston, Richard Block, Christine Griffiths, Mel Gill, Niki Hughes and Paul Flint.

In 2008, the first full year for the Singers, Steve Duckworth wrote an arrangement of the traditional folk song, Scarborough Fair for Ashbourne Singers.  Linda Perry Smith returned to sing the duet with David Sunter and the choir as it was originally intended.

The penultimate song was An Irish Blessing, a real favourite among the choir who have performed it many times at the end of their concerts.  The beautiful sentiments and lovely melody by James E. Moore Jr. settled the mood nicely, but Steve was not going to leave it there . . . After the speeches and thanks, he invited everyone to join in singing God Only Knows bringing a joyful end to a memorable concert.

Everyone had a good night filled with joy, nostalgia and hope . . . here’s to the next ten years.