Ashbourne Singers Easter Concert In Aid of The Laura Centre

Over the last couple of years, under the Musical Direction of Steve Duckworth, Ashbourne Singers have introduced a Spring Concert to raise funds for local charities.  This year the chosen charity is The Laura Centre.  Opened by the bereavement charity COPE in 1991.  The Laura Centre offers specialist bereavement counselling to parents whose child has died and to children or young people who have been bereaved of a parent or significant person.  Based in Leicester with new centres now open in Derby and Coventry, the centre offers wide ranging individual and group support as well as a variety of alternative therapies.

Chris Dillie from The Laura Centre Derby gave a short talk about the charity and their work before the themed concert which reflected the essence of the charity with many thought provoking pieces. 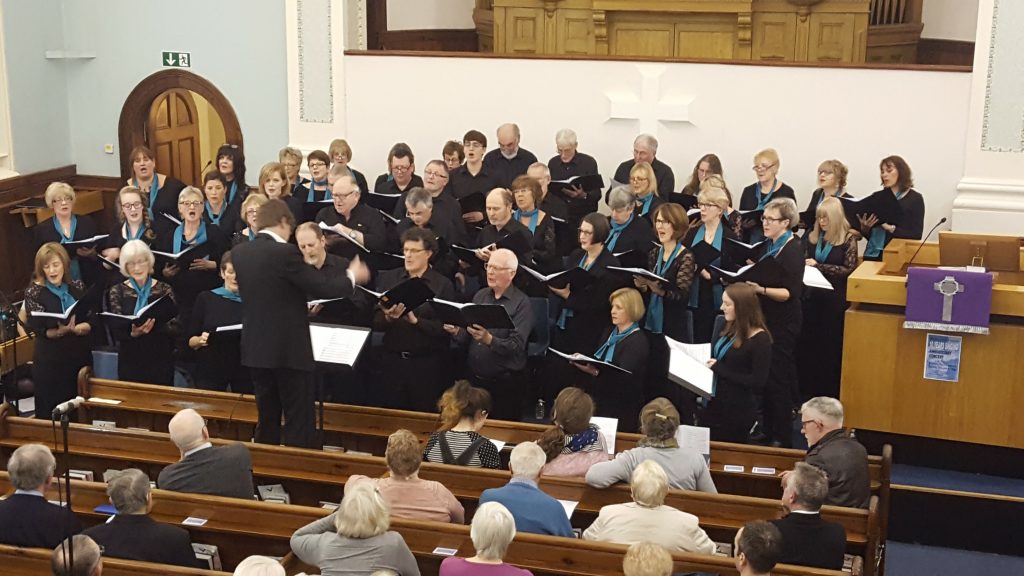 The choir opened the concert with a reflective rendition of Drop, Drop Slow Tears by Orlando Gibbons, written some 400 years ago. This was swiftly followed by the adults singing the very upbeat Fa Una Canzona (‘Make Me a Song’) Madrigal by Orazio Vecchi.

The young singers then took centre stage with three pieces: Bob Chilcott’s Can You Hear Me? (A simple and beautiful setting describing the wonder of a world seen through the eyes of a deaf child),  Butterfly Fly Away Words & Music by Glen Ballard and Alan Silvestri (Flute Sophie, Violins, Emma and Ellie Palmer) and Give Them Hope Words & Music by David Sunter and Steven Duckworth, solo by David Sunter.  Young Ashbourne Singers (YAS) performed all three songs with obvious enthusiasm and enjoyment of the music. All of these pieces were accompanied at the piano by our enormously talented young musician Josh Short.

The choir then combined forces again to sing Simeons’ Canticle by Manling Francisco and Paulo K Tirol, music set to Luke 2: 29-32. Solo’s from Jessica Duckworth, Beth Schratz and Krista Pearson were backed up by the full choir and our accompanist Sophie Freeman to great effect.

Something Inside So Strong was written in 1984, inspired by a television documentary seen by Labi Siffre in which white soldiers were filmed shooting at black civilians in the street.  The Singers gave a meaningful rendition, ideally suited to the object of the concert.

Two gospel inspired numbers closed the first half; Say the Word by Rodney Bryant, and Total Praise by Richard Smallwood, during which Josh Short (usually known for his dazzling Trumpet and Piano playing) made his performance debut on drums!

Tea and an enormous selection of cakes (donated by choir members) were then served by members of the Methodist Church in the interval. All donations received for these were retained for the Methodist church.

The second half started with If Ye Love Me by Thomas Tallis (c.1505-1585) and fitted the theme of this concert very well with a lovely peaceful feel to the performance.  The familiar Sunrise, Sunset from Fiddler on the Roof gave a poignant reminder of the journey we all make through life and how time passes so swiftly.  (Solo Violin, Ellie Palmer).

I Watch the Sunrise (Close To You) Words & Music by John Glynn and Colin Murphy was a highlight of the concert.  This moving song was beautifully sung by the young singers with the full choir; Annie Woods and Eloise Bevan sang the first verse in solo and duet, before the full choir joined in for verse two.  What stars the young singers have become in our concert programmes!

Steve then introduced the obligatory John Rutter, his works having become a staple diet of the choir! This time it was one of his more recent works, Look to the Day. The unmistakable Rutter arrangement and harmonies are always great to sing and please the audience. Sophie Freemen provided a lovely Flute Solo which enhanced the overall effect.

YAS then sang the Christina Perry song A Thousand Years Words & Music by David Hodges and Christina Perri, accompanied by beautiful Flute & Violin parts.  The meaningful words of this song are full of love and hope.

Pentatonix’s Run To You showed how effective silences can be in a piece of music, Steve’s plea for no coughing during its performance seem to have the desired effect on the audience!

The reaction to Sam Lawson’s solo Bring Him Home from Les Misérables raised the roof.  Complemented by a lovely accompaniment on piano by Steve Duckworth, this performance really was top class from such a young man.

Snow Patrol specializes in “melancholic rock” and had a big hit with Chasing Cars a few years ago. Run is a more recent song in similar vein with words and impact that really echoed the message of the concert and charity. Violins from Emma and Ellie, added to the effect.

Say Something by A Great Big World slowly built up to a climactic pleading call and response chant between the YAS and the adult choir, finally finishing with the poignant words from YAS “Say Something. . .  I’m Giving Up on You.”

The songwriter Paul Williams has the knack of producing great songs, particularly for children’s films and shows. The Rainbow Connection from The Muppet Movie was great fun and even had a guest conductor – Kermit the Frog!

After the thanks given by the retiring Chair of the Singers, Tim Tarling, Steve took to the piano once again, and Sophie Freemen stepped forward to conduct the choir singing Coldplay’s incredibly powerful song, Fix You to great effect. Well done Sophie!

The well thought out programme and the excellent performances certainly took the audience on a roller coaster ride of emotions.  The singers have certainly come a long way in ten years and they will be celebrating with a retrospective concert later in the year, not to be missed.

We thank the following for their support:

All musicians and helpers within the family of Ashbourne Singers,