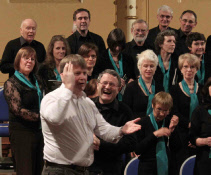 Following many weeks of practice, under the leadership of Linda Perry Smith, The Ashbourne Singers were treated to a day’s workshop with visiting conductor, Adrian Bawtree.

Adrian patiently honed and improved their technique during the day and led them in a concert at St. John’s Church in the evening, accompanied on the piano by Steve Duckworth.

They began with two spiritual songs, then Anton Bruckner’s Ave Maria. Steve had arranged two numbers which a small group of the choir then sang under his direction; ‘Black is the colour of my true love’s hair’ and ‘I will give my love an apple’.

The finale was the full choir singing five movements from Karl Jenkins’ The Armed Man – Kyrie, Sanctus, Hymn before Action, Agnus Dei and Benedictus to an appreciative audience.