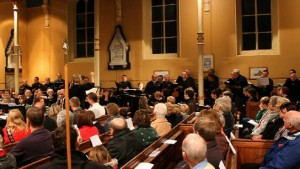 To a backdrop depicting soldiers at war, the combined instruments of the Ashbourne Town Band and the voices of The Ashbourne Singers gave tribute to current servicemen and women and the fallen.

David Sunter sang a moving solo of a song which he and Steve Duckworth had arranged – ‘Bring them home’ . 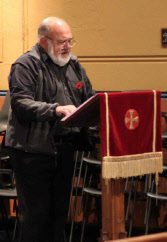 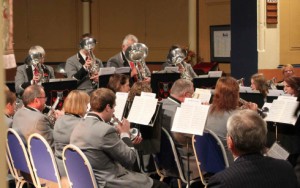 Alan Kingston sang ‘When this blasted war is over’, again, as a solo.

A selection of wartime songs, hymns and marches was performed, some with the band and choir together and others where the choir was accompanied by Steve Duckworth on the piano.

The congregation joined in with the more popular pieces and the service was completed with prayers and the Act of Homage.