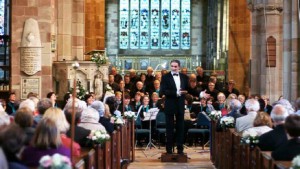 An enormous task loomed ahead of Michael Halls, the organist and choirmaster of St. Oswald’s Church; to raise tens of thousands of pounds to restore the church organ. As a contribution to that effort, the Ashbourne Singers performed a concert in St. Oswald’s, following a day’s workshop with guest conductor, Stephen Hope . Stephen had spent the day with about 40 of the singers, helping them polish the performance of Vivaldi’s Gloria, which Linda Perry Smith, their musical director, had been rehearsing with them. Accompaniment was provided by the Ad Hoc Baroque Ensemble and the guest organist was Peter Gould. (Master of Music at Derby Cathedral) 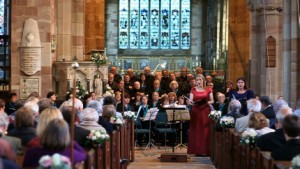 The evening began with a stirring performance of Handel’s Zadok the priest followed by the ensemble playing Correlli’s Concerto Grosso and Allabreve in D major by Bach. Gently, the singers harmonised through Mozart’s Ave Verum Corpus and Bruckner’s Locus Iste, before singing Faure’s Cantique de Jean Racine. The audience was treated to a duet from Linda (soprano) and guest Vivien Easom (mezzo soprano) as they sang the beautiful Panis Angelicus by Cesar Franck. The first half of the evening was completed with the choir singing John Rutter’s For the Beauty of the Earth. 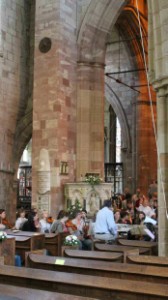 The second half was devoted to the performance of Vivaldi’s Gloria, a work in twelve movements. The ensemble and choir brought together their skills under the baton of Stephen Hope with Linda and Vivien adding clear solo and duet parts, to produce a superb performance, much appreciated by the large audience.