In a service of remembrance, dedicated to serving men and women and the fallen, the Ashbourne Town Band and the Ashbourne Singers combined their musical skills. Under the leadership of Eric Lee, the band opened the evening with the British Legion march, Airforce Army/ocean wave and Saying goodbye.

Linda Perry Smith conducted the singers in a moving rendition of Abide with me, as the band played and the audience joined in, then Becky Dalton, backed by the Singers, sang Hero. Once more, the audience joined in with It’s a long way to Tipperary and Pack up your troubles, before the band finished the first half with Stroll through the park and Journey through America. 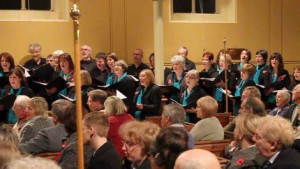 After the interval, The great escape, Bui-Doi and the 1914 march were played by the band, before all of the singers, audience and choir sang the White cliffs of Dover.

Alan Kingston was accompanied in a solo performance of Standing in line by Steve Duckworth on the piano. Steve’s skills then came to the fore as the choir sang his own arrangement of Amazing grace, with Linda singing a crystalline soprano line.

Musket, fife and drum , played by the band led into Saving Private Ryan (from Hymn to the Fallen), before the service closed with prayers and the Act of Homage and the National Anthem.