Musical Director Steve Duckworth always ensures that Ashbourne Singers produce a concert of a high standard. This year’s Christmas Concert performance was once again outstanding and included a varied choice of music that was much appreciated by the audience who filled the Methodist Church to capacity.

Paul Flint opened the concert singing Gaelic Blessing by John Rutter in his warm baritone voice; ‘Deep Peace’ settled on us all.  The full choir took up the mantra with People Look East in a rising series of chants before effectively launching into the song.

The swinging Joseph and the Angel by Richard Terry further lifted the mood, followed by one of Steve’s young students, Lucy Hill, giving us a very confident rendition of Three Kings by Peter Cornelius. The choir then sang Born In The Night with additional instrumental accompaniment by Jessica Duckworth on the flute. How lucky the Singers are to have such a pool of talented young singers and accompanists coming through its ranks

No sleeping for the audience during the next two songs Torches and Gaudate – both were full of energy and lifted the rafters!

The Coventry Carol arranged by Steve made us all think of the Bible story of Herod’s massacre of the infants; a poignant reminder of the persecutions which still continue in the world today.  As if to pacify us and give us hope the choir followed this with Will Todd’s Softly which was beautifully sung by the choir; “Bring me out of darkness and open my heart”.

Back to the Christmas story the choir then lifted the tone with their joyous rendition of Sing The Birth: they certainly were on their toes to sing this one! There was then another change of mood, closing the first half with the beautiful Nativity Carol by John Rutter.

The whole room then filed into the church hall for the interval refreshments and were confronted with a fantastic array of cakes and drinks provided by choir members. It was such a lovely social gathering that the interval lasted longer than usual.

The second half kicked off with the now traditional Ashbourne Singers rendition of the Twelve Days Of Christmas, including much enjoyed audience participation. The balcony section certainly gave it their all with “five gold rings” much to the delight of everyone.

Carol Of The Bells jazz arrangement by Kirby Shaw then followed – a lively arrangement, extremely well executed by the choir.

YAS then sang the song Stars by Mary Donnelly – Steve bought this thinking it was a Winter song only to find that it was in fact a Summer song! It’s amazing what a change to a couple of words makes and the Young Singers sang it beautifully.

The choir are currently enjoying having a strong contingent of teenage voices amongst its membership, some of whom will be moving on to University next year.  To mark this, Steve highlighted their talents via The Pentatonix arrangement of Little Drummer Boy: a fabulous chance for them to show off their close harmony skills to great effect.

Mary Did You Know? written by Mark Lowry and Buddy Greene has become a modern Christmas classic and is sure to become a staple for the Singers; it was a lovely accomplished controlled piece of singing.

David Sunter (the quiet one in the Tenors) stepped forward and gave a punchy rendition of the Casting Crowns’ I heard the Bells on Christmas Day overlaid by the whole choir with great effect.

In November the Singers took part in a concert to commemorate the ending of the First World War 100 years ago. A highlight of the concert was In Flanders Fields sung by the Young Singers. The reprise at this concert just showed how good they are and how Steve really gets the best out of them.

The appropriate Midwinter by Bob Chilcott reminded us of the winter months yet to come; always a favourite song that paints a frosty picture.

Somewhere In My Memory from the “Home Alone” film cannot help but touch us all.  The Young Singers were in their element, backed by the chorus of Adults and ‘Flora Pasmore’ on the Glockespiel.

After thanks were given the Singers gave their adieu by singing We Wish You A Merry Christmas (Jazz) by Kirby Shaw.

This concert was wonderful on every level. No-one can have any doubt that the Singers put on a first class show.  Well done Steve and Josh Short – Josh accompanied all concert pieces from the piano brilliantly and was instrumental in preparing the choir in the run up to this concert. 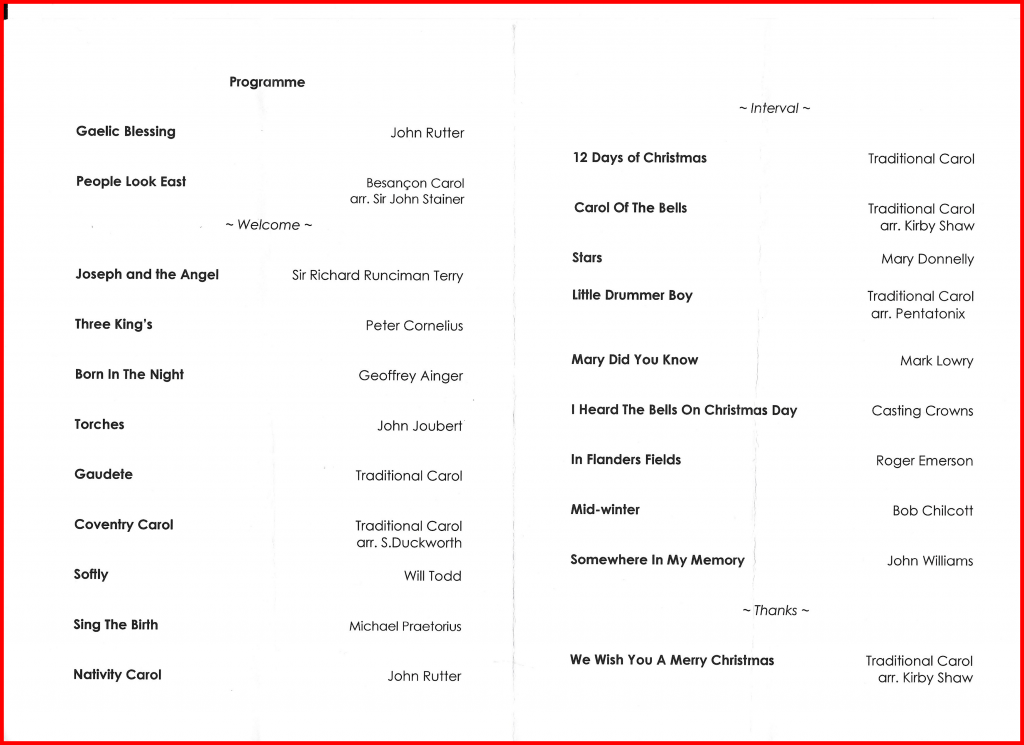