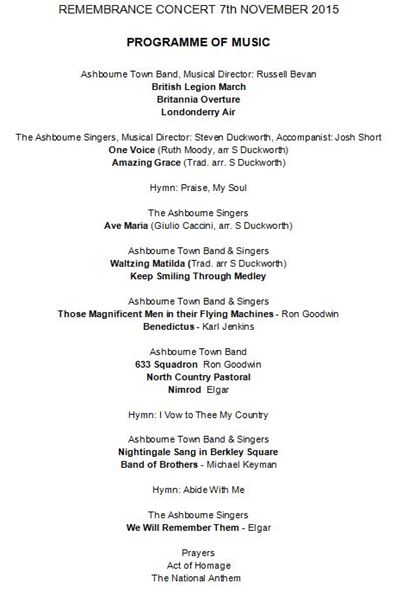 Ashbourne Singers and Ashbourne Town Band gave a concert in St Oswald’s Church Ashbourne for the British Legion that was a fitting tribute to the fallen of two world wars and recent conflicts.
The band performed a variety of music from the stirring British Legion march to more reflective pieces such as Nimrod and music from Band of Brothers. The Singers joined with the Band to sing Benedictus from Karl Jenkins’ The Armed Man: A Mass for Peace. They also sang a number of popular song pieces with the band.
The Ashbourne Singers performed beautiful arrangements by Steve Duckworth of Amazing Grace, Ave Maria and One Voice rounding off with Elgar’s We Will Remember Them. Josh Short accompanied the Singers on piano and gave a lovely trumpet solo performance leading in to the choir singing Ave Maria.
The choice of music and the performances were uplifting and often poignant, inspired by bravery and sacrifice.