On Sunday 11th May, 50 very excited Singers from Ashbourne boarded a bus and journeyed down to London to take part in an exhilarating concert performance of the ‘Mozart Requiem’ in the Royal Albert Hall. We formed part of the chorus of 1800 singers! 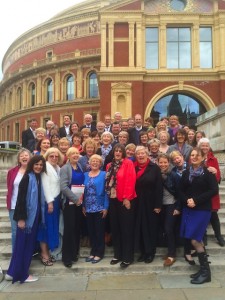 The Scratch Mozart Requiem is run by The Really Big Chorus, Britain’s largest choral society. Its membership is drawn from choral societies throughout the country. Conducted by the wonderful Brian Kay (a highly respected musician, patron of many choirs and one of the original members of The King Singers), and accompanied by The English Festival Orchestra, we rehearsed together at 4pm and then took to our seats again (very high up!) at 7pm for the concert performance.

In the first half we were treated to the Orchestra playing a delightful ‘Eine Kleine Nachtmusik’, followed by an amazing young performer, Anna Hashimoto, just 16 years old playing the ‘Clarinet Concerto in A major’. It was stunning.

Then it was our turn! Jan Walding, said ‘I had a surreal moment, I couldn’t believe I was about to sing Mozart Requiem with 1,800 singers in the RAH, when 7 years ago I couldn’t read a note of music!’. It is very hard to explain the thrill of the sound of so many singers filling such an amazing venue. But we did it and we did it well. Ashbourne can be proud of all our singers for taking part and achieving something so special.

The buzz afterwards was electric, with excited comments: ‘a marvellous, uplifting experience’, ‘an honour to perform in such a wonderful hall’, ‘sent shivers down the spine’, ‘a once in a lifetime experience.’ Alan Weir even said ‘it was better than watching Derby County in the playoffs!’ and Jo Bradley summed up the whole day beautifully: ‘We sang our hearts out and laughed till we cried! Life doesn’t get much better than this!’