The candles blew out in the strong wind and the rain pelted down, but the allure of mulled wine, mince pies and carols was greater than the inconvenience of a wet coat. The church was packed well before seven o’clock, with those ‘in the know’ sitting in precisely the right places to sing ‘Five Gold Rings’ later on.
Thirty Young Ashbourne Singers joined with almost seventy of the adult choir to produce a varied programme of Christmas music, led by Linda Perry Smith and accompanied on the piano by Steven Duckworth and on the organ by Michael Halls.

The three opening carols were unaccompanied – ‘Deck the Hall with Boughs of Holly’, ‘Gabriel’s Message’ and ‘No Room’, before the ladies sang about the plight of Mary in ‘Heaven Knows Why’. Having waited patiently, it was then the turn of the youngsters to join the adult choir in ‘A Maiden Most Gentle’, bringing the sweetness of children’s voices to the carol. 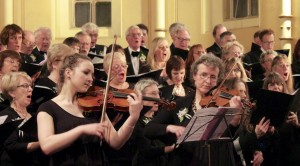 Britten’s two pieces ‘Balulalow’ and ‘This Little Babe’ came next, sung by a small group of ladies, with Sally Hamer singing a clear and beautiful solo, before the audience swelled the sound singing ‘Angels from the Realms of Glory’.

One of the choir members, Emma Palmer and her daughter Ellie then accompanied the choir on violins with the moving arrangement of ‘The First Noel’ to the tune of Pachelbel’s Canon. By the sound of the applause, this was very well received and appreciated.

Two more carols followed before the children had another chance to show just how far they had come since the last Christmas concert, singing ‘Because it’s Christmas’. 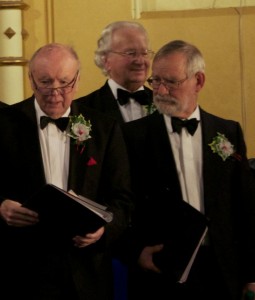 It may have been the mulled wine in the interval, or just the cheerful atmosphere in the church, but what came next surpassed all previous performances.  It was the turn of the audience to sing ‘The Twelve Days of Christmas’. The section who sang ‘five gold rings’ not only harmonised (having practised, no doubt) but were decked in festive headgear – antlers, baubles, bonce-bouncers, to name but a few.  The children were very co-ordinated with their partridges in pear trees, but the ‘seven swans a-swimming’  the breast stroke had to be seen to be believed!

The three carols that followed brought back the atmosphere to the real meaning of Christmas, the Nativity Story.   ‘Sans Day Carol’, ‘Carol of the Bells’ and Bob Chilcott’s arrangement of ‘Mid-Winter.’

The gentlemen then sang a moving carol not widely known – ‘Starlight’, by Giles Swayne, before Steven Duckworth, accompanied by a small group, sang a very special arrangement of ‘The Three Kings’.  (Not only does Steven accompany the choir on the piano, but assists with the coaching of the gentlemen and as we heard, sings beautifully, too.) 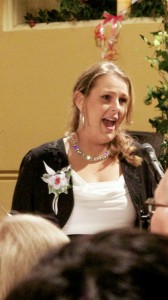 The mood changed once more to fun and lightness, as the children sang ‘All I Want for Christmas is You’  followed by the audience standing to sing the traditional carol, ‘Hark! The Herald Angels Sing’.

The highlight of the evening came next, when Linda sang a very moving and beautiful piece ‘O Holy Night’, with the adults gently singing in the background.  Clear and pure, her voice filled the church, with the high notes seemingly produced effortlessly, leaving the audience and choirs close to tears.

The evening closed with a jazzy version of ‘We Wish You a Merry Christmas’, sung by both choirs.  Once again, the people of Ashbourne were treated to a delightful evening, setting the tone for a happy Christmas. 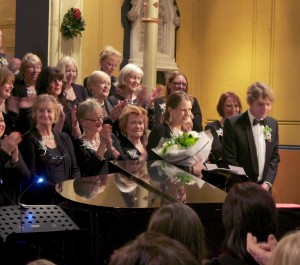