Each year, the village of Kirk Ireton enjoys a week of festivities in June, as they celebrate their Wakes Week. A small group from the Ashbourne Singers were invited to sing a selection of their songs, with a promise of pudding afterwards. 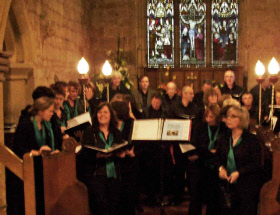 Irving Berlin’s music was the opening choice with a medley of his songs, followed by the TV theme tune for the Vicar of Dibley – The Lord is my shepherd.

Sue Tansey sang Stranger in Paradise and the choir harmonised a capella in Moon river. Then it was the turn of the gentlemen as they sang the English version of Men of Harlech.

The mood changed again as the choir sang I could have danced all night and the first half finished with a stirring performance of Leonard Cohen’s Hallelujah!

The audience enjoyed a feast of sweets, puddings and cakes during the interval, before the choir resumed with Karl Jenkins’ Adiemus. Next up was Candle on the water from Walt Disney’s film Pete’s Dragon, before Rob Morton sang Singin’ in the rain.

The concert was finished with a medley of Rodgers and Hammerstein’s songs from Broadway, to a very full, appreciative audience!