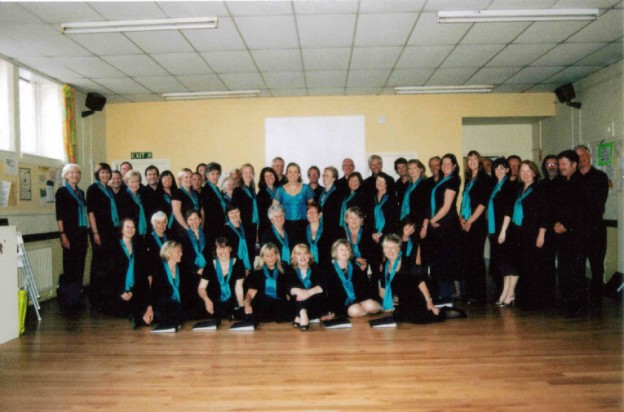 Ashbourne Festival was host to the first public performance of two new arrangements of old English folk songs at a concert given by the Ashbourne Singers. The pews were packed at St John’s Church, Ashbourne, to hear the choir perform an eclectic repertoire of pieces including works by Simon & Garfunkel, John Rutter, Leonard Bernstein and the Beatles, as well as the new arrangements by choir member Steve Duckworth .Several members of the audience, who had also attended the Choir’s inaugural concert last Christmas, expressed astonishment at how far the Singers had progressed in so little time.

The programme was a mix of popular, folk and choral pieces, which demonstrated the diversity and range of the 50 strong choir, directed by professional soprano Linda Perry Smith. First up was a swinging rendition of Chattanooga Choo Choo, with accompaniment by Steve on piano and Kevin Browne on drums. This was followed by two tuneful hymns, For the Beauty of the Earth by John Rutter and Psalm 23. Next was a spirited performance of Amazing Grace by ten singers, including several choir members who had attended Linda’s singing workshop that day. A rather unexpected and accomplished Teddy Bears’ Picnic followed and then came the two new works. The first was Steve’s arrangement of the original version of the old English folk song I will give my love an apple. The piece was sung a capella by an octet from the choir. The second arrangement, also by Steve, was Scarborough Fair. Solo parts were taken by Ray Taylor and Linda. The choir were joined by a string section comprising Peter Bolton, Jenny North, and Rachel Keeling who at 14 , ranked as the youngest performer of the evening. This piece was enthusiastically conducted by choir member Michael Halls, organist and choir master at St. Oswald’s Church.

Anyone who thought it couldn’t get any better was then treated to a solo by Linda of ‘Think of me’ from Phantom of the Opera by Andrew Lloyd Webber. The first half ended with a spirited medley from West Side Story by Leonard Bernstein and Stephen Sondheim, which showcased the talents of individuals and groups from within the choir. A shorter second half included a gospel style arrangement of Bridge over Troubled Water and a tribute to the Beatles which included favourites such as All you need is Love and Strawberry Fields.

Ashbourne Singers are a Community Choir. “We don’t hold auditions,” explained Linda, “we just want people that love singing.” During the performance she told the audience that the choir had been life changing for many of those present, a sentiment echoed afterwards by several choir members. This programme will be repeated on Saturday when the Ashbourne Singers perform at 7.30pm in Wilfred House, Carter Street, Uttoxeter, in aid of the Uttoxeter Methodist Church Building. Linda is also planning a Young Ashbourne Singers section for 10 to 18 year olds, starting in September.